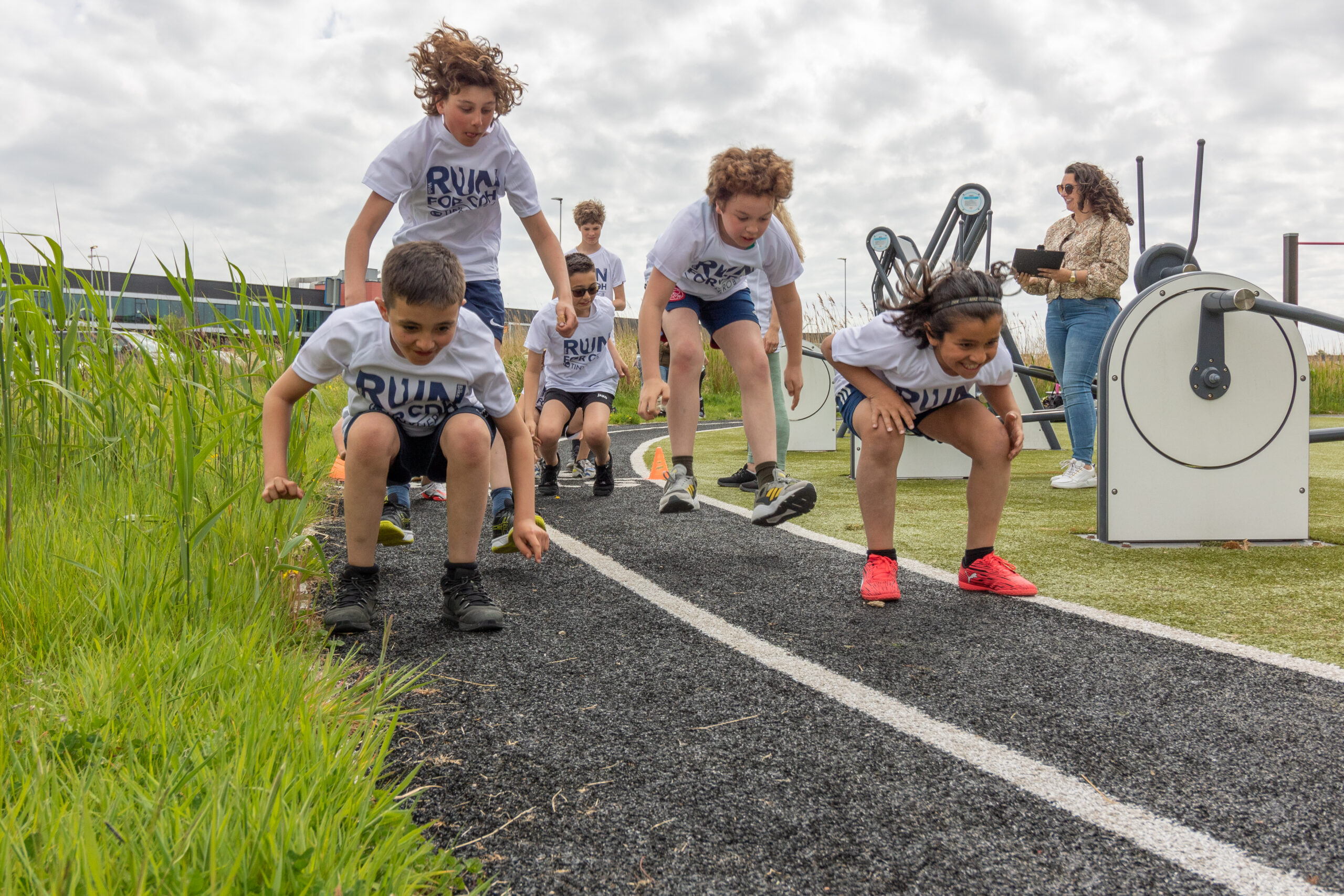 The Tiny Hero Run 2022 was a huge success. Throughout the Netherlands parents, children and family members made a great effort organizing activities to raise money for CDH. This resulted in beautiful days and wonderful amounts of money. The total sum raised amounted to almost 6,000 euros! Maartje, Mike and Esther share their experiences and explain how it feels to be involved with CDH in a positive way.

A tradition is emerging, states Maartje. Together with her partner Coen, she participated in the Tiny Hero Run for the second time. After last year’s marathon from their hometown Schijndel to the Amalia Children’s Hospital in Nijmegen, this year they mapped out a running course in the shape of a typical CDH lung development, with a large healthy lung and a smaller affected lung.

“It was another festive day, together with lots of family and friends,” says Maartje. “We noticed how nice it feels to be engaged with CDH in a positive way. Since it usually comes a lot of worries.”

Maartje and Coen are parents of Merel (2). This year they came up with an activity together with Lotte and Koen, the parents of Ode (2). The two couples met each other in the hospital, both parents of a child with CDH. They became friends there, and their relationship got even stronger when Lotte and Koen moved to a place near Schijndel.

Unfortunately Lotte could not participate in the Tiny Hero Run due to illness, but Maartje, Coen and Koen put down a great performance. Maartje first ran the ‘small’ circle of 9 kilometers, with the two fathers and Merel cycling along. After that they reversed the roles, with both fathers running 15 kilometers. “It was tough for Koen, he still had a mild stomach flu,” says Maartje. “But he was really very brave and he made it. At the finish-line, there were Lotte and the children, family and friends giving us a warm welcome. And the grandmothers baked pancakes!”

Apart from having a beautiful day, the couples together raised over 1,000 euros. “The fact that people are so compassionate and donate money is really touching. It makes you feel grateful.”

It is now two years since Merel and Ode were born, and they are very happy and social children. Both have had health problems and were hospitalized, but they are now developing very well. And as a result, the parents are doing better and better as well.

“After we heard during the pregnancy that our child has CDH, we decided to just let it all come over us,” says Maartje. “When we eventually got home, things got tough. We started realizing what we had been through. That’s why I decided to go to therapy. Every time Merel got ill, I feared something was seriously wrong and that she would have to be hospitalized again. Fortunately I’m starting to get better at dealing with those feelings now.”

On the same day as Maartje, Coen and Koen, Mike and Anne also took action. Together with Mike’s parents they walked from the Sophia Children’s Hospital in Rotterdam, where their son Sam (1) was born, to their home in Dinteloord. A hike of about 40 kilometers, which took almost ten hours. “Sam was born a day before last year’s Tiny Hero Run,” Mike explains. “We saw all these great initiatives passing by and immediately thought of doing something this year.”

With their own initiative, they raised a whopping 3,000 euros. “A lot of people sympathized and supported us, it was really great. They donated so much more than expected. Everything fell into place that day. The weather was perfect, the route was beautiful and the donations were great.”

Because, says Mike, in the end he also did it to raise as much money as possible. “Our little son survived thanks to all kinds of research. We hope that this way we can contribute to new research and more attention for CDH, so that in the future more parents can enjoy their child with CDH leading a healthy life.”

Meanwhile, Sam is doing well. He’s on the same level of development as a child without CDH. “Except for the scars, there is nothing different about him,” says Mike. Mike and Anne have had a rough year, though. Before birth everything looked good, but things turned out to get a lot scarier than expected.”

“After a few days Sam got blood poisoning, which meant he had to be put on ECMO after all. When he was connected, he was without oxygen for dozens of seconds. After that we had to wait for days to see if there would be any permanent damage. The surgery turned out to be the turning point, because after that, thankfully, he only kept improving.”

Ray, Daisy and Wesley’s baby son, was born around the same time as Sam. After delivery, Ray was diagnosed with left-sided CDH. He had to fight for his life, but is now doing great. He has not seen the inside of a hospital since October.

Daisy, Wesley and Ray ran from the Radboudumc in Nijmegen to their home in Arnhem during this year’s Tiny Hero Run. In just under 4 hours, they covered 16.5 kilometers and raised 240 euros. ‘We think there should be more money for research and awareness of CDH We had never heard of it before Ray’s birth’, Daisy writes.

Tijmen and his friends

Two weeks later, on Wednesday, May 11 Tijmen and his friends took action. Last year he and seven of his friends raised €1460 by riding their mountain bikes. This year their group was even bigger. Roan, Xam, Daan, Kerem, Emir, Mees, Tieme, Ammar, Emir, Shiloh and Tijmen went bootcamping together. With a fantastic result: 1,602 euros! “We find it really special and sweet how people have supported us again,” says Esther, mother of Tijmen.

The boot camp was the second plan the boys came up with. “First they wanted to go ice skating, but all the rings are closed during this period.” The special boot camp area at the workplace of Martino, Tijmen’s father, turned out to be the ideal solution. “They did a great job organizing that. The company had arranged fruit trays, smoothies, juices and water for the boys. Even the personal trainer was there. He did a warm-up and a game with them, so they were well warmed up.”

Then the boys started bootcamping as many laps as possible. A lap consisted of: frog jumps, burpees, lunges, push-ups, running over low racks, jump squats and a bit of sprinting. Most achieved at least ten laps, some even more than twenty. “I was sponsored per lap, but fortunately I had settled on a maximum amount,” says Esther, laughing. “An adult is normally done after three laps, so it’s really very impressive what they accomplished.”

The perseverance did give the boys three (!) days of muscle pains. “They walked up the stairs funnily at school for days, that’s how much pain they and it shows how they really gave it their all.”